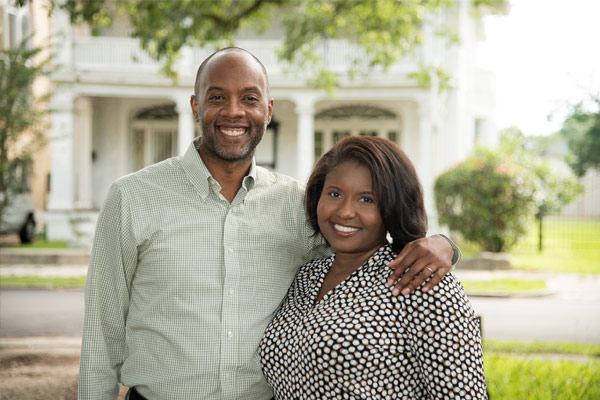 Robert grew up in Prichard, Alabama. He attended the Greater Morning Star Baptist Church and John S. Shaw High School. After graduating with honors, he left home to attend the United States Naval Academy in Annapolis, Maryland. While attending the Naval Academy, Robert served as class president, sang in the gospel choir, and spent two summers as a volunteer in the Mobile District Office of Congressman H.L. (Sonny) Callahan (R - Alabama District 1).

Upon graduating, Robert was stationed in Japan where he qualified as a Surface Warfare Officer on an amphibious transport dock and in Singapore where he served as the Officer-In-Charge of the Military Department on a combat oiler. Robert spent a total of nine years on active-duty in the United States Navy and completed overseas deployments in the Asia Pacific and Arabian Gulf operating areas.

After completing his military service, Robert entered Duke University’s Fuqua School of Business, where, on the first day of classes, he met his future wife, Aqualyn Laury Kennedy. Upon graduating, Robert launched his civilian career in the casino industry, and subsequently transitioned into retail.

For the last portion of his corporate career, Robert served as the General Manager of Global eCommerce & Digital at Bio-Rad Laboratories, Inc. In this career capstone, Robert had global responsibility for Digital Strategy, Online Sales & Marketing, Digital Product Development, and Marketing Technology. (Note: Bio-Rad Laboratories develops, manufactures, and markets a broad range of products and solutions for the life science research and clinical diagnostic markets. The company serves more than 150,000 research and healthcare industry customers around the world through its global network of operations.)

Robert holds a Bachelor of Science in Political Science from the United States Naval Academy, a Master of Science in Leadership & Human Resource Development from the Naval Postgraduate School, and a Master of Business Administration from Duke University.